Renowned spiritual leader Sri Sri Ravi Shankar, on Thursday, visited different relief camps in the flood-affected areas of Purnia and Madhepura in Bihar to bring solace to the survivors and take stock of the relief operations undertaken by the Art of Living. 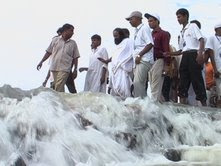 in knee-deep water for 3 km from Jankinagar in the Purnia district to Murliganj in the Madhepura district to interact with the victims. Sri Sri, who arrived in Purnia in the morning, counselled the victims taking shelter in the Jankinagar Phulwari camp, where the Art of Living is taking care of nearly 5,000 people.

Later addressing a large gathering of 10,000 people from nearly 50 surrounding villages, Sri Sri advised them to maintain a positive outlook towards life despite the devastation. “Make best use of your stay in the camps under difficult circumstances. As it’s going to take some more time for the waters to recede and the rehabilitation process to materialise, utilise the time here to learn new skills,” he said. He announced that the Art of Living would provide vocational training to women in the camps. It has already started training in tailoring skills at the Jankinagar camp. Sri Sri also said the Art of Living would start a campaign to teach reading and writing to illiterate people staying in the camps.

He extracted a commitment from the people not to practice female foeticide and to stop harassment of women. He announced that the youth of the area would be trained under the Art of Living’s Youth Leadership Training Programme so that they can shoulder the responsibility of rehabilitation in the area. Urging the people not to lose heart, Sri Sri cited the example of Nagapattinam, which was completely devastated by the tsunami in 2004, and now has been completely rebuilt. “See this devastation as the foundation of a new rebuilding,” he said.

Many of the victims shared that they were feeling relieved after attending the trauma relief sessions offered by the Art of Living. Sri Sri also lauded the good work done by the Art of Living volunteers, particularly the doctors, who have come from different parts of India and abroad. Earlier in the morning, the District Magistrate of Purnia, C Sridhar received Sri Sri on his arrival.

Within hours of the flood that has affected an estimated 3.5 million people, the Art of Living has been carrying out a multi-pronged relief operation in the flood-affected areas of Bihar on a war footing. In addition to providing emergency supplies and trauma care to the survivors taking shelters in various camps, the Art of Living is reaching out to more inaccessible areas as many villages are still submerged under water.

The Bangalore-headquartered NGO has already mobilised and dispatched relief materials worth more than Rs 10 crore to Bihar. It proposes to raise another Rs 40 crore for the rehabilitation of the victims. 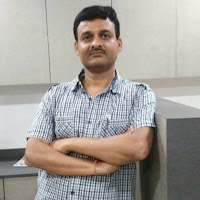